This page contains a database of hyperspectral images.

Most existing hyperspectral database are mainly outdoor scenes with limited field-of-view (FOV), or pictures of specific objects. Our will is to make available, to the lighting and color community, a database of high spatial and spectral resolution images with large FOV.

Natural and man-made built environments available in the database were acquired using a VNIR4 SPECIM (sCMOS-50-V10E model) hyperspectral camera attached to a SPECIM rotating scanner. A 18.5mm lens (f/2.4 fixed aperture) was mounted on the camera which is equipped with a sCMOS sensor (14.2mm width, x-y spatial resolution is 2160*1080 pixels).

The resulting vertical FOV is 42° (the horizontal FOV depends on the rotation of the camera). The camera spectral range is 400-1000nm. Its spectral resolution FWHM is 2.9nm (30microm slit). Spectral sampling varies between 0.63 and 5.07nm according to the binning. The signal-to-noise ratio (peak) is 170:1 (no binning). 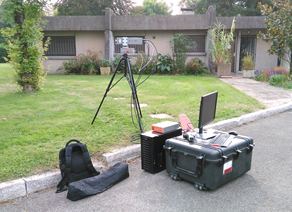 For reducing file size, data were acquired with a 2-by-2 binning resulting in a vertical spatial resolution of 1080 pixels and 480 spectral bands with a width between 1.22nm (at 394.6nm) and 1.34nm (at 1007.00nm). Dark noise correction and radiometric calibration were done in AizaTools Version 4.3 vs2008 producing two ENVI files: a binary file (.dat), and a header file (.hdr) containing the metadata associated with the binary file. The Matlab multibandread command can then be used to load ENVI files and produce hyperspectral cubes (radiances are in µW/cm^2.sr per nm).